Can One Company Handle All Oakland Storm Damage Issues? 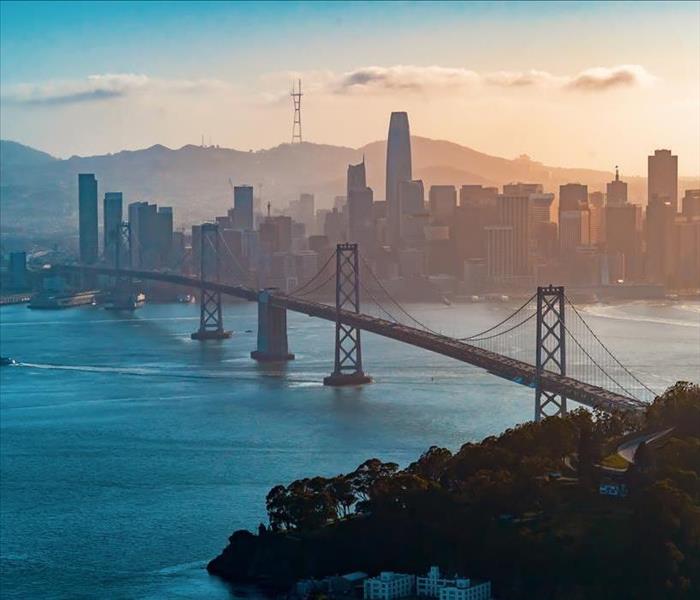 SERVPRO says--Rely on us for flood damage mitigation in Oakland

Oakland suffered significantly from a massive storm in October 1962. Striking an 1100-mile swath from British Columbia to the Bay Area, strong winds, torrential rains, and mudslides devastated the area, resulting in 46 deaths and hundreds of injuries. Estimates immediately after the storm totaled California's dollar damage,  plus that to  Oregon and Washington, at $2.4 billion, adjusted.

On September 28, 1962, 500 miles from Wake Island in the central Pacific Ocean, an updraft formed. As it intensified and moved north-west. By October 3, it was named Freda and upgraded to a tropical storm. Over the next few days, it began moving north-east, becoming extratropical by October 10. Waning in intensity, the system drifted into a powerful storm formation zone off of northern California. The conditions re-energized the cyclone, pummeling the coast of California on the 12th and into the 13th.

What Were the Effects of the Storm of 1962 in Oakland and Elsewhere?

Dying cyclones rarely cause issues when they reach the Oakland area, losing intensity and the threat of significant damage. The extratropical cyclone origin of the 1962 storm makes it one of a kind occurrence, not happening at any other time in the recorded climatological record:

How Do Professionals Turn the Tide on Storm Damage in Oakland?

Floods and other Oakland storm damage overwhelm property owners. With the rigorous training, experience, and appropriate equipment SERVPRO brings to your extreme weather disaster, the journey back to "Like it never even happened," completes rapidly. Our company's licensed contractor status permits us to follow expert storm damage mitigation and remediation with repair and rebuilding services.

What Should Property Owners Expect During the Storm Damage Recovery Process?

After the call goes to SERVPRO, our team travels as soon as practical to your home. Although we have a general idea of the tasks ahead, our project manager must inspect your house's specific layout. After a safety hazard inspection, our crew:

Hire SERVPRO of West Oakland for wrap-around mitigation, remediation, and restoration after storm-related damage to your home. We respond 24/7 to calls at (510) 599-9300.